The SX-NEWAH was both Silex Technologies and an industry-first 802.11ah Wi-Fi Solution for IoT Devices. With the help of Newracom, Silex has developed a unique Wi-Fi module that aims to satisfy the need for a long-range, moderate data rate, low-power Wi-Fi solution.

This Sub-GHz wireless module functions in the 1 GHz band, and offers a variety of advantages compared to previously released 2.4GHz & 5GHz Wi-Fi Technologies. This module utilizes Wi-Fi HaLow, and shares similar qualities to other LPWAN technologies. In any circumstance where a stable long-range connection is required, the SX-NEWAH is more than competent in helping to get the job done. With TCP data rates up to 9 Mbps and its ability to support a large number of connected devices - this module's use cases are quite extensive.

The SX-NEWAH utilizes Sub-GHz Networking, allowing for increased coverage compared to previously released 2.4GHz/5GHz Wi-Fi technologies. This type of networking increases object permeability, allowing radio waves to travel further while maintaining a stable and reliable connection. The lower the frequency of the band, the less likely reflection and diffraction are to occur.

This module's TCP throughput ranges up to 9 Mbps, perfect for voice-activated devices and low to medium quality video resolution. The SX-NEWAH offers much higher data rates when compared with other LPWAN technologies like LoRa, SigFox, and NB-IoT.

the SX-NEWAH is a versatile piece of equipment as It is great for both outdoor and indoor environments. Below are a few unique examples of how this module can be used.

The application of IoT devices in smart cities has continued to grow over the years. Placing devices like digital kiosks, smart street lights, and parking sensors within a 1-kilometer distance from each other can all be made possible with the SX-NEWAH. Individuals can monitor these devices, extract valuable information from them, and use the data to better develop the city.

As we continue to see improvements in building automation, security systems and alarms have become significantly more prevalent. Individuals who have a large portion of land, and need a non-wired reliable surveillance system for their property would benefit tremendously from a module like the SX-NEWAH. With the NEWAH's ability to allow multiple device connections, users can experience extensive coverage around their desired area of surveillance.

The quality of life for individuals will improve with the implementation of this technology. Cities and residences will not only become safer, but will also become more secure with access to data and video surveillance. The SX-NEWAH is a viable solution for serving in the process of executing these tasks.

To learn more about 802.11ah and the SX-NEWAH, download our new whitepaper, 802.11ah for indoor application 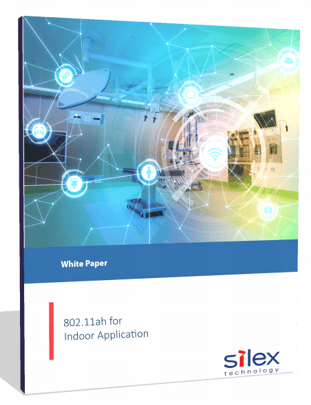