Orthogonal Frequency Division Multiple Access (OFDMA) is a key feature of IEEE 802.11ax (WiFi-6). Over time, the world has continued to see a demand in the amount of data consumption per individual. Processes like sending an email to a coworker require little data, while others like video calling your boss require more. In order to process this information, various data modulation methods are used such as FSK, DSSS, and OFDM. Since the release of WiFi-6 in 2019, its data modulation method OFDMA, has contributed immensely in solving network congestion problems by providing a boost in network speed and efficiency.

How Does OFDMA work?

OFDMA is a multi-user version of OFDM, primarily meant to allow access points the capability to simultaneously serve multiple users with different amounts of data consumption. This process is facilitated by splitting channels into smaller frequencies known as resource units or (RU’s). These being 20, 40, 80, and 160 Mhz channel sizes.  Resource units can range in number and size dependent on the amount of data a given device requires. For a task that requires a large amount of data, the larger the RU will be. An access point (AP) can then transmit this data to various users by assigning them RU's based on how much bandwidth the user needs.

The process described above can be simplified by using a cargo truck analogy shown in the graphic below. This analogy compares and contrasts OFDM/OFDMA to further the readers understanding of how OFDMA operates. The first illustration displays 4 cargo trucks all delivering different amounts of goods to the same destination (OFDM). The second Illustration depicts 1 cargo truck delivering various goods to its targeted destination (OFMDA) 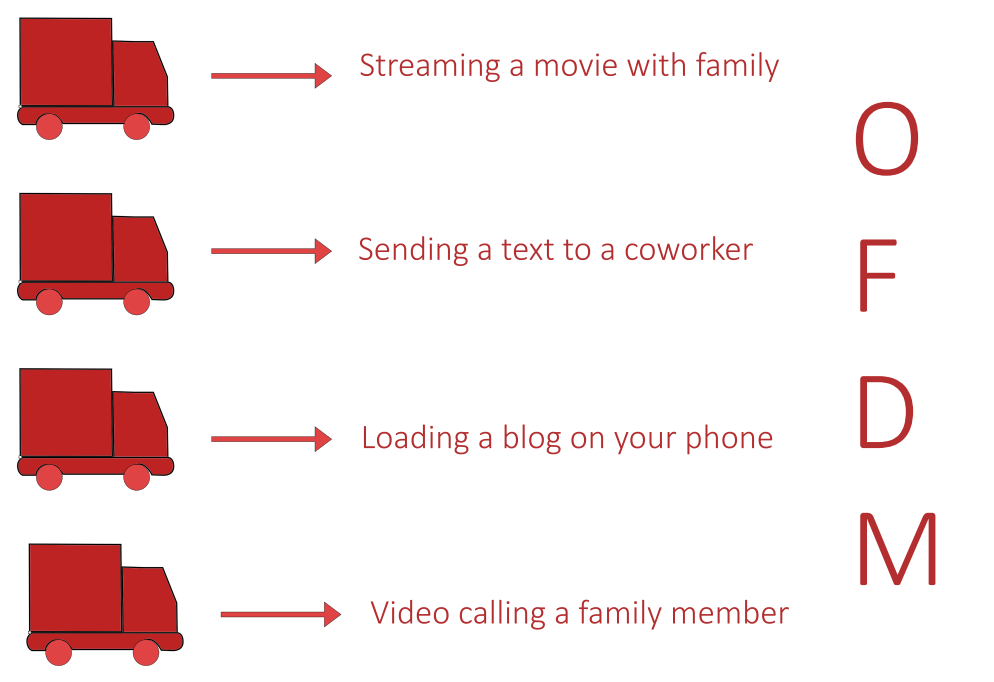 OFDM is typically found in older standards and WiFi (WiFi5/IEEE 802.11ac). This method transmits data sequentially parallel to one another. Each data frame (truck) in OFDM must wait for the other to deliver its cargo before the other can proceed.  This is seen as the cargo trucks deliver their cargo individually to the same destination. Although these trucks are delivering their cargo, there still might be room for more inside each truck. In OFDM, the cargo inside each truck is constrained to a fixed amount. In OFDMA, channels are split into RU's where one truck can theoretically hold enough cargo filling it to capacity. 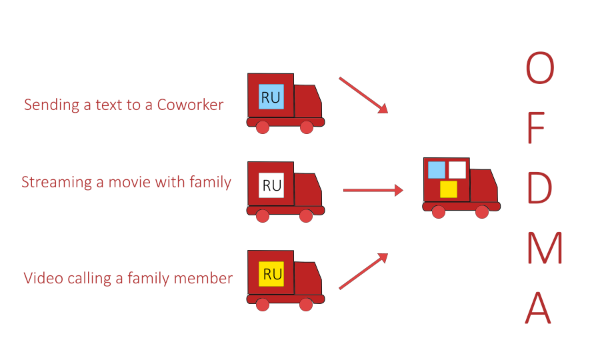 OFDMA utilizes RU’s or resource units and allocates them to transmit this data all simultaneously. This process splits channel bandwidth more effectively. As seen above the one singular truck is packed with all of the different types of cargo varying in different sizes. OFDMA takes into account how much cargo is in each truck, and packs the one singular truck to deliver the cargo more efficiently.

Additional Clarification: Another analogy to distinguish the difference between OFDM & and OFDMA is to view these process's with a supermarket analogy. OFDM provides 1 check-out line for groceries as data is processed individually frame by frame. As described previously OFDMA splits channels into subchannels for more efficient transmission of data. This would provide four check-out lines for groceries instead of 1.

Learn more about Silex Wi-Fi 6E solutions or read up on the differences between Wi-Fi 6 and WiFi 6E in this white paper.